For most of us sports lingo can sprout into our daily conversation like dandelions on an soccer field. Most of the jargon makes sense for it refers to a specific action. For example, a “spike” in volleyball means to smack the ball across the net in a downward angle. A “kill” means to spike the ball with so much force, the defending team can only watch the ball hit the ground for a point. And a “side-out” is when a volleyball player grows tired of all the spiking and killing and switches to shuffleboard.

Then there is sport’s lingo that holds no relation to any action or object. One term I never fully understood is why the English call their soccer field a “pitch”.  Merriam Webster please explain:

I’m not sure one can slide tackle through this definition. Any others?

PITCH: a degree of a slope

Slightly better but not an ideal situation, chasing a soccer ball down the side of a mountain. Ah, here it is under British slang.

PITCH: (a) an outdoor sight for camping (b) a playing field

It would be nice if the Brits started using nouns to name their objects instead of verbs and adjectives like pitch, lift, flat, crisp and worse of all, mate. But while we are on the pitch I want to address another soccer term.

NUTMEG:  to dribble or pass a ball through the legs of a defender. 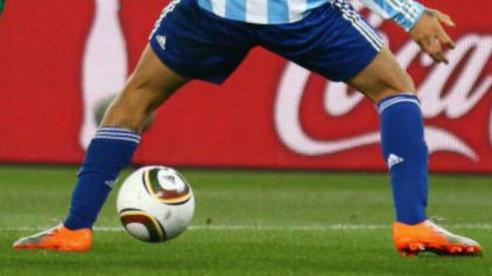 Why nutmeg? If you are going to pick a spice, why not coriander? Let us research…

It looks like this term also has English origins.

There is another possible origin. Since nutmeg was a rare and valuable commodity in the English trade, some of the more enterprising exporters inter-mixed wooden replicas of the nut in a shipment. Thus, to be “nutmegged” was to be duped.

I think both origins help explain how this became a soccer definition. After all, if there is one part of the pitch a defender should be able to protect, it’s the region below the family jewels. To have an opponent pass the ball though the legs is a humiliating act. The only thing worse is to have the opponent also drinking a pumpkin-spiced latte.  Double Nutmeg!

Since we are currently on the isle where it started, let’s talk golf.

Mark Twain said playing golf was a good walk spoiled. What did he mean? Well, if you driven past a golf course, you will notice well-manicured fields. And strategically placed in those immaculate fields are flags that rest in small circular holes. Trying to get a little white ball into these little holes is what ruins the walk.

Every hole has a designated amount of swings aka hits. For example, if a hole states it should take five swings to get the ball into the hole and the golfer takes five swings, he or she just shot par, meaning not bad, not great, but okay. Par!  So far so boring. But what happens if the golfer completes the same hole in four strokes? What then?

BIRDIE: one under par

Shooting a “birdie” is considered a nice play. But where does the lingo come from? I don’t see many birds being able to swing a club. Let’s dive into the origin…

It looks like birdie derives from 19th Century American slang. Before people were calling things cool, they were calling them bird as in, “That shot you had on Hole Five was really bird.”

Can you believe it? There was a time when giving someone “the bird” was considered a compliment. The original meaning may have faded with the middle finger, but the golf lingo remains. So much so it influenced the next golf term, meaning what do you call two under par? First of all, you would call it rare. Plus it’s really cool, worthy of a cool name. 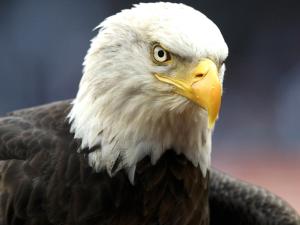 And by chance if the heavens were to open up and God guided a second shot of a Par Five into the hole, giving the golfer a three under par for the hole and bragging rights in the clubhouse, what would that be called? Well, it depends what side of the Atlantic you made this impossible shot.

If you made the shot in the United States, three under par is called a double eagle, which isn’t very bird. Something this phenomenal should have an equally compelling term like golden eagle or double-platinum eagle. To call it a double eagle brings a pedestrian description to a rare accomplishment like double dribble or double dip, two activities that take little skill and are frowned upon in basketball and at happy hour.

Now, if you were to make three under par in the British Isles, those chaps like to call it an “albatross”.

From what I remember from British Lit, seeing an albatross is not a good sign. Let me revisit…

In Samuel Coleridge’s “Rhime of the Ancient Mariner” seeing an albatross on the high seas is indeed a sign of good fortune.

At length did cross an albatross
Through thee fog it came;
As if it had been a Christian soul,
We hailed in God’s name.

However, knocking an albatross out of the sky with an errant golf ball or intentional bullet will only bring about misfortune.

Ah – well a-day what evil looks
Had I from old and young
Instead of the cross, the albatross
About my neck was hung.

Yes, the Ancient Mariner’s shipmates were none too pleased by the idiotic action of their co-worker when he shot and killed the albatross. They were so irate they made him wear the bird like a bow tie as punishment for they believed it was his fault their boat lay listless in the ocean with no wind, no rain, and too much sun, which is mot a good recipe for pleasant ocean sailing. 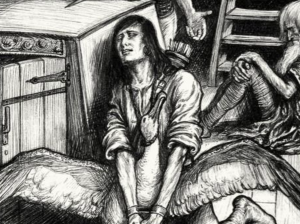 Not a Cool Bow Tie

I’m not a fan of using an albatross as a golfing term. First of all, if you shoot a three below par, you need a cooler bird than an eagle and there are no cooler birds. Plus, I’m not sure you would want to use a bird that can represent good or bad luck depending on its physical condition. At the very least the British should qualify the term as in, “I say there, mate, fine work of it with the flying albatross. Let’s celebrate at the pub. Pints and crisps are on me. I do hope they have fixed the lift at my flat for I will be too knackered to toddle up the apples. Cheers!”

Playing a round of golf under par is a great way to spend an afternoon. But for most of us, our scores tend to end up on the plus side.

BOGEY: one over par 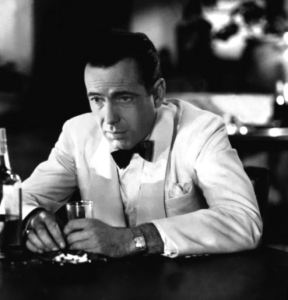 For some reason I always thought a bogey was attributed to the silver screen legend, Humphrey Bogart. For every time I miss an easy putt for par, I hear his raspy voice, “Out of all the holes on the course you had to three-putt this one.”

Actually the term comes from the more sinister character from 1890’s British Folklore, The Bogeyman.

Really? One over par is the guy who hangs out in closets and under beds waiting to terrify children? Isn’t that a bit of overkill for a recreational sport? And why does this guy get to hang round if you keep missing with double bogey and triple bogey?

I think the Sandman should sweep away the Bogeyman so we can continue with an avian theme. But instead of assigning majestic birds to poorly played holes, we can have a list of birds with descending capabilities of flight.

Since we are on the topic of birds, let’s talk turkey. For those of you who are not familiar with the basics of bowling, the gist of the sport is to knock down ten pins with one bowling ball. You get two attempts. But if you knock down all ten pins with your first throw, that is called a “strike.” If you get the same result on your next turn, then you have two strikes. And by chance if you roll three strikes in a row, that is called a “turkey”. Why a turkey? Unlike the albatross, a turkey doesn’t have any positive definitions.

TURKEY: (a) a failure or flop 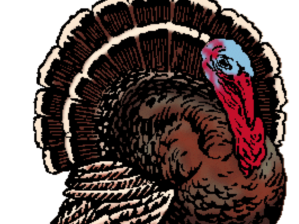 Not a Cool Bird

How did an amazing feat get saddled with such lame lingo? Again, we have to go back to the 1800’s between Thanksgiving and Christmas when proprietors of bowling establishments would drum up crowds by offering free give-a-ways. Most of the items were food related and the grand prize usually involved a live turkey awarded to anybody who could roll three strikes in a row.

Today it seems like a foolish gambit to give away livestock for an achievement most amateur bowlers can accomplish. But in the day of the ox and cart the lanes were not finely polished. At best they were rough-shod, undulating wood. Plus the pins had to be manually set, which meant “off-set”. Finally it was difficult to get a clean shot at the pins with all the roaming poultry.

So the next time you are in a bowling alley just remember that turkey you just rolled is no turkey at all. It might be pretty bird, but it’s no double-diamond eagle. To get that you would also have to roll the bowling ball between the legs of three live turkeys.